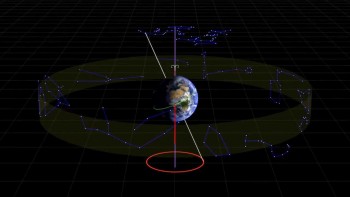 ​As Jump!Star nears its signature event at Symphony in the Flint Hills in 2019, many people are stunned to learn that Polaris (our current North Star) will not be our North Star in about 1,000 years. How is this possible? What will be our new North Star? How do we celebrate this? These are some of the questions Jump!Star seeks to answer. During our recent Jump!Star event at The Volland Store, Jana Grcevich, astrophysicist and co-author of A Vacation Guide to the Solar System, spoke about the Earth’s axial precession.

Earth primarily feels the gravitational pull of our Sun in space, but it also feels the gravitational effect of our Moon since it is so close to us. As Earth rotates on its axis, centrifugal force causes the equator to bulge. The dueling gravitational forces of both the Sun and the Moon pull on this bulge and causes the Earth to wobble as it spins around it axis, like a spinning top as it leans before stopping. This wobble is called “precession,” and the precession of Earth’s rotational axis takes approximately 26,000 years to make one complete revolution! During each 26,000-year cycle, the direction in the sky to which the Earth’s axis points goes around a big circle. In other words, precession changes the North Star as seen from Earth.

Here is a great video Jana Grcevich shared at The Volland Store to help explain this visually:

This means that Polaris has not always been our North Star and in roughly 1,000 years our northern axis will point toward Gamma Cephei. We will jump from Polaris to Gamma Cephei.

Although Gamma Cephei (we call him “Ceph”) rates as only a third-magnitude or moderately bright star, it is easy to find and quite visible in the dark skies of the Kansas Prairie. On June 15, 2019 Jump!Star will explore and celebrate Polaris, Ceph and the stars to come as we partner with Symphony in the Flint Hills for a night of music, dance, storytelling and stargazing at Irma’s Pasture near Bazaar in Chase County, Kansas. Join Jump!Star creator George Ferrandi and the Jump!Star artists:

This is the signature event of Jump!Star and the culmination of nearly half a decade of work by artist George Ferrandi and the Jump!Star team. Book your tickets today and be part of defining the cultural celebration of our new North Star 1,000 years from now!

Get Symphony in the Flint Hills Tickets

Want to support this program? Make a donation today!